Time is the most important element of good writing. Writing isn’t so much a single act as it is a process, a series of starts and restarts and drafts and revisions. Because of this, I believe that, given enough time, most reasonably educated American adults are capable of writing a passable blog article to be used in a content marketing campaign. The trick to writing a decent blog article, then, is to give it the proper amount of time—and making the most out of that time.

Last week, I wrote about how to get a company blogging project restarted when it hits the skids. Among my many dazzling nuggets of advice was to block out an hour or two of time each week to focus on writing. “Focus” is the key word here. How many times have you set aside time on your calendar for something, only to squander your allotted period answering phone calls and dealing with “quick questions”?

Finding the time for writing means eliminating—or at least ignoring for a while—distractions. Here are a few ways to do that:

1. Unplug and Tune Out

A 2010 article in the Guardian describes the writing environment of “great American novelist” Jonathan Franzen:

On Franzen's desk sit a pair of earplugs that he wears when he writes, over which he places noise-cancelling headphones that pipe "pink noise" – white noise at lower frequency. His computer has had its card removed, so he cannot be tempted by computer games. The ethernet port has been physically sealed, so he can't connect to the internet. While writing The Corrections, he even wore a blindfold as he touch-typed.

Unless you're trying to get yourself shortlisted for the National Book Award, I don’t think you need to go as far as blindfolded touch-typing. I do think setting up your writing space to help you avoid online and offline temptations will go a long way towards getting your articles done on time.

Here’s an idea: If your company has a staff blogging project underway and people aren’t completing their assignments, find a relatively secluded space in the office and outfit it with nothing more than a non-Internet connected computer. There’s your writing studio. Everyone should be assigned to spend an hour or two there every week (and make sure they check their smartphones at the door).

2. Wean Yourself off Word

“I actually like it; it does everything I want a word processing program to do and it doesn't do anything else," he said in an interview with Conan O’Brien. “I don't want any help. I hate some of these modern systems where you type a lower case letter and it becomes a capital letter. I don't want a capital. If I wanted a capital, I would have typed a capital. I know how to work the shift key.”

Martin isn’t the first person to complain about the overly intrusive Microsoft Word. Word is the tool I use most for writing, and it doesn’t bother me a whole lot, but I can see how its many autocorrect and formatting features can distract from what should be a fairly straightforward process of putting one word after another. If writing is supposed to be a draft process, then there is no reason to worry about formatting—the appearance of an article—on the first draft. But Words seems to want us to think otherwise.

If you’re looking for distraction-free alternative to Word and you have a quarter-century old PC lying around, you can go Martin’s route. If not, you could try one of the newer-tech apps built to emulate the retro writing environment.

Of course, you could always turn to the ultimate distraction-free writing medium: pen and paper.

When you’re in the middle of a meeting with a client and the phone rings, you don’t answer it—not unless you want to lose your client. Why is it that we think it’s absolutely essential to answer the phone at certain times, yet completely optional at other times?

The great thing about phones (and for an introvert like me, there aren’t a whole lot of great things about phones) is that the person on the other end can’t see what you’re doing when you’re not picking up. Most people will assume you’re indisposed for (what they think is) an important reason, like a meeting with a client. So go ahead and ignore the phone while you’re writing. 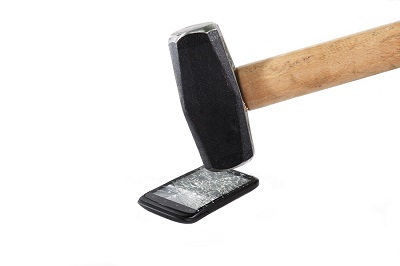 Better yet, just unplug it.

4. Get Serious About Deadlines

I think the main reason people find it easy to get distracted from blog writing is because, deep down, they just don’t think it’s that important. I recently asked the members of my agency what was preventing them from contributing more to our blog and I got the same answer from everyone: client work.

That’s a good answer, but if we truly believe content has the power to grow businesses online, then we need to put our money where our mouths are. That means elevating writing, the act of creating content, to the same priority level as the other work we do in our jobs.

If managers really want their team members to crack down and get their blog articles done, they should emphasize that failure to do so is a failure to fulfill an essential duty. Nothing helps people focus more than the watchful eye of the boss.