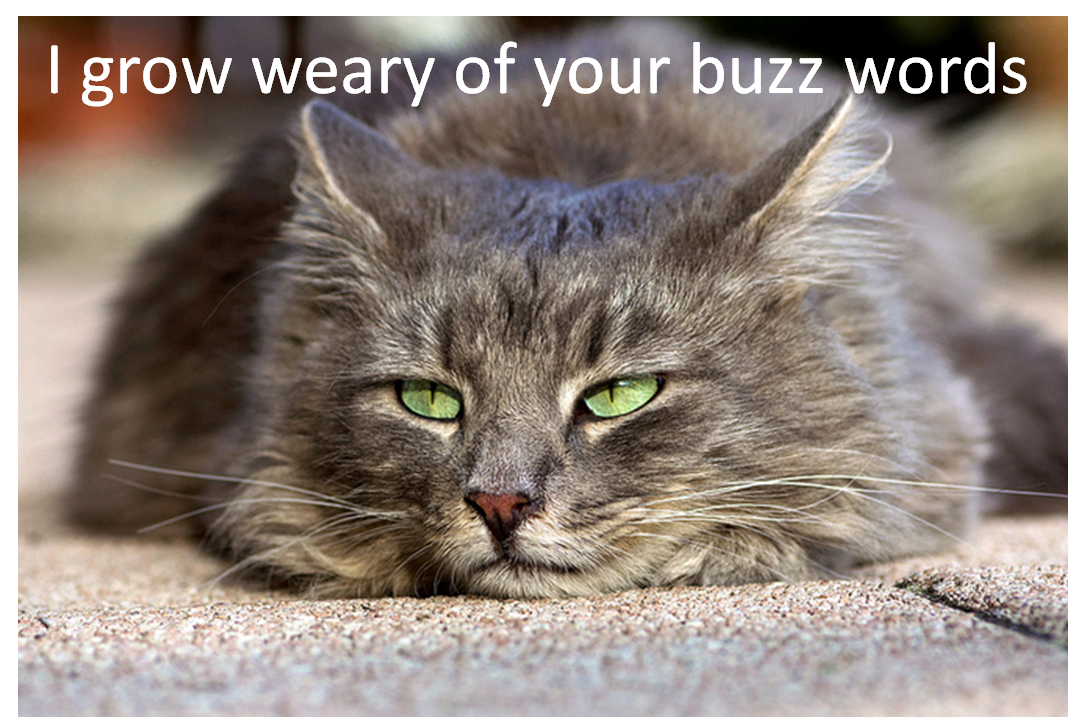 Have you ever tried to describe your job to your grandmother? I did recently, and as an inbound marketing consultant, the experience was revelatory. I realized that all the terminology I have learned is useless when it comes to actually explaining inbound marketing to someone who doesn’t keep up with the latest developments in the marketing and online worlds.

Marketers who want to do inbound find themselves in this position often. It’s not just grandsons explaining their work to grandmothers. It’s marketers trying to get the rest of their departments on board with inbound marketing or trying to convince their bosses to hire an agency the specializes in inbound.

I think it’s important to realize that, to many people, inbound marketing doesn’t mean anything at all. The best way to reach these people isn’t with the buzzwords that inbound marketers use among themselves, but by conveying the value of the inbound tactics.

Buzzwords are exclusive and won’t get you any friends

Nothing is worse than having to listen to someone talk about something you don’t understand. Once I realize I don’t understand something, I tend to tune out. My mind wanders from not understanding to not caring; I just want to get out of the conversation and into more familiar territory.

I think that’s why a lot of university academic papers are difficult to enjoy and fail to convey their message the first time reading them. Although many would argue that they aren’t intended for the masses, that doesn’t mean that these academic papers can’t be written in a voice that is easier to comprehend because there isn’t any benefit to making something less comprehensive for the sake of sounding “smarter.” They aren’t written to be digested by the common reader, which is a shame because educational pieces should aim to be educational to the masses, not just the experts in a given field of study.

When I read an academic paper, I tend to think, “Wow, this writer is either showing off or is trying to hide the fact that they have nothing significant to say.” It’s funny because when I first started work at Innovative Marketing Resources, I was still stuck in research paper mode and my content editor told me the same thing when I was writing blog articles. He also reiterated, “Think of your audience,” and that didn’t really register until I read over some of my initial blog attempts. I really appreciated that criticism because the purpose of informative writing is to inform, not create some kind of puzzle that one has to decode in order to find the answer one is looking for.

Buzzwords tend to be misused and therefore misunderstood by the layperson seeing or hearing them for the first time. This is because they usually only have a basic understanding of the topic or confuse the buzzword for one with a similar sounding name. An example of this might be somebody associating inbound marketing with social media marketing. Although inbound has an aspect of social media marketing to it, it doesn’t mean that it is solely defined by that one aspect.

When people talk about inbound, there are usually other words attached to its meaning. For example, you’ll see buzzwords such as “lead generation,” “sales and marketing alignment,” and “organic” used all the time in relation to inbound marketing. Although these are important elements of inbound marketing, they don't necessarily capture everything that inbound entails because it is many factors working together that define an inbound marketing campaign and determine its overall effectiveness.

Furthermore, with any buzzword, it’s good to be aware of the current changes that are affecting its value. Chances are, whatever the buzzword is, its meaning will change and evolve over time as it becomes a more popular topic to marketers. A perfect example of this is the concept regarding SEO. Conventional SEO tactics regarded keyword stuffing and link building based on quantity over quality. Now those tactics are outdated and will actually be likely to warrant a penalty from Google, so it just goes to show you how drastically a concept can change in the world of marketing.

Conveying inbound without the buzz

Let’s say that there is a hypothetical marketer who is in the business of making cold calls and is tired of calling leads that just simply aren’t qualified to talk to, but has to because their job depends on making a certain monthly quota. Would it not be better to have these leads come in naturally? If this hypothetical marketer wanted to convey to their department head that they should really switch their marketing strategies toward inbound marketing, then it’d be beneficial for this marketer to  explain the services that would carried out as opposed to just saying “we should do inbound marketing.” Instead of just blandly repeating the buzzowrd, talk about in these terms; "I want to use blogs, social media, and content that is tailored to a potential prospect's needs to generate a higher volume of well-qualified leads."

By explaining what inbound marketing entails as cumulative whole, you eliminate the risk of them attaching their own perceived definition. It’s not only a better selling point, but it will also differentiate you from all other people trying to explain the value of inbound.

Whether you are talking to a client, selling a prospect, convincing your department to utilize inbound marketing, or explaining inbound marketing to your grandmother, be sure to talk about it in terms that they can understand.